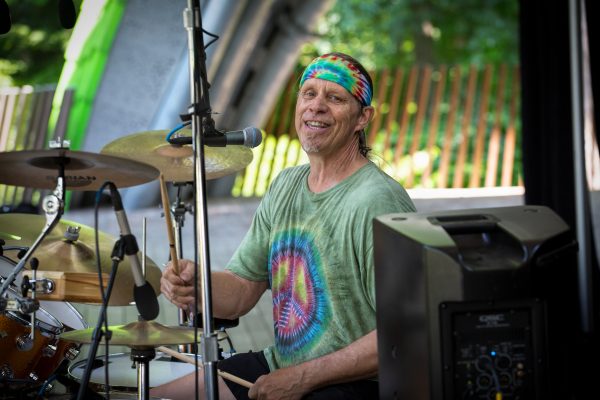 In 1979 Mike’s first professional band started in a garage. But this was no ordinary garage. For almost 2 years his band Stage Fright, had its rehearsal space in a local cemetery’s maintenance garage/grave diggers’ locker room. “SF” was a power trio that quickly gained local notoriety for their all out stage shows and their bizarre beginnings.

By 1983 the trio project evolved into a five piece 80’s cover band known as Kickin’ Axe. Grinding their way through the Baltimore metal scene, Kickin’Axe enjoyed a 5 year run playing such notable venues as Coast to Coast, The Seagull Inn and The Sandbar.

Mike then signed up for a 3-year stint with the highly successful Romanos, a Top 40 dance band, playing corporate events, weddings and the country club circuit. Working major venues in Baltimore and Washington gained Mike valuable experience that he has put to good use.

By the ‘90s, “alternative” was in and Mike grunged his way for 7 years with the Howard County based band Burp the Kat. His most memorable gigs include Graffiti’s, Nottingham’s, Frederick Keys- Harry Grove Stadium and the Fells Point Music Festival.

Raising a son and daughter, Mike took some time off from music but returned, in 2014, to pursue his passion with The Reilly Goulait Band.

And his timing, always being perfect, now brings his energy, enthusiasm and musicality to JANGLEBACHS!